Snapshots of Ivrea, Italy: Everyday moments during a not-so-everyday celebration.

No one is too old for Carnevale 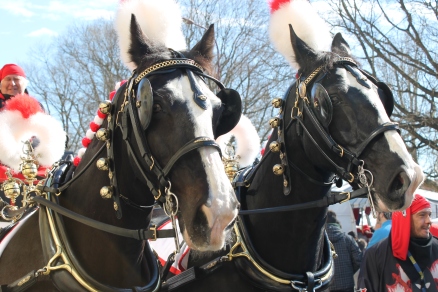 Dozens of horses are used during the battle 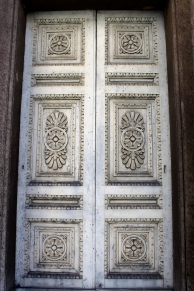 Even young boys took part of the “townspeople” teams

tiny revelers play, unaware of the history or antiquity of their surroundings.
Highlights of the City:

2. Santa Maria Assunta Cathedral
The Cathedral of Ivrea originates from a church built in the 4th century on the site of a pagan temple and has since changed styles a few times, finishing with a 19th century neoclassical façade. Left completely alone during the fray of the battle, it was a beautiful moment of calm.

3. The Old Bridge (Ponte Vecchio)
Originally built in wood in 100 AD, the Ponte Vecchio is a prime location of the battle. Piles of oranges are pushed off the narrow bridge with snowplows during pauses between fights.

4. The Rocca
The brick castle is rectangular with three round towers at each angle. The fourth tower, used as storage for ammunition, was struck by lightning and exploded. In the 17th century it was used as a prison.

5. San Savino Festival
Every July 7th Ivrea celebrates the feast-day of San Savino, its patron saint, with a horse fair complete with parades and horse shows. Perhaps that is how they had so many beautiful horses guiding the carriages during the Battle of the Oranges. Ivrea’s relationships with horses goes back to its roots: the city’s original name was “Eporedia” meaning “horse carriage”

6. Museum of Contemporary Architecture
This open air museum stretches over roughly two kilometers along via Jervis, containing the buildings that represent the culture of Olivetti, an Italian manufacturer of computers, tablets, smartphones, printers and other such things. The walk explains Olivetti’s commitment to architecture, urban planning and design and how Ivrea fits in to that idea.

7. Roman Amphitheater
Remains of the first century amphitheater are found slightly outside of Ivrea, on a country road that will bring you to the late-Imperial age site.

8. Viverone Lake
Near to Ivrea, Viverone is an enormous glacial lake perfect for a day trip. During the Bronze Age there was a village of stilt-houses built over the lake’s surface and findings from the era make it an archeological site.

Though Ivrea is often only considered for its orange battle, the city is beautiful. With warm people and piazzas, ample green space and the large, clean Dora Baltea River as a backdrop I look forward to visiting the city again and exploring even further into Piedmont region.