Escape to the Mountains

It’s hot. Really hot. The summer dragged its feet getting here this year but after this past week it’s arrived in full swing – swooping in to wither our plants and provide a persistent humidity.

During the summer the Milanese, along with nearly all the citizens of Lombardia, either bolt to their seaside homes in Liguria or head further north to their apartments in the mountains. Marco’s family falls into the latter group, and with a hectic period behind us and a busy month ahead, we decided to take advantage of our only unscheduled Friday and Saturday to escape the city and head to the mountains. We left the stagnant heat of our third floor apartment and high-tailed it to the mountains.

Marco’s family has a beautiful house in Piazzatorre, a small, almost-unknown town tucked into the mountains. It’s about a two hour drive north of Monza and about 30 minutes north from adorable San Pellegrino. Yes, the very same San Pellegrino that you get your water from. Piazzatorre is where I spent two weeks with Italian family members two and a half years ago and consequently met Marco, my then new Italian friend and my now husband (funny how that happens huh?).

For Marco a weekend in Piazzatorre means relaxation, hiking, summer, family and some of his closest friends. Those sentiments aren’t far off from how I feel about the tiny town either and as we headed farther and farther above sea-level I couldn’t help but be thrilled to go – with invitations turned down and Friday work hours cut short it really did feel like we were making our escape.

Saturday Marco’s parents, Marco and I got ready for our first hike of the season. We decided to do “Torcola 2000” – a hike that leads to an area of the mountain called Torcola that is, despite the name, 1840 meters above sea level. (How they keep all these hikes and destinations sorted out is beyond me, but I guess it helps that they’ve been doing it for a couple decades). 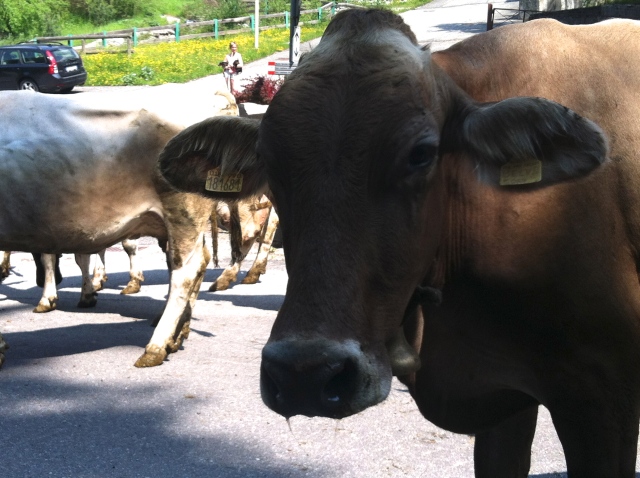 Turns out, we weren’t alone! A truck carrying a load of about 50 cows had just arrived. They were unloading and being shepherded up the same path we were taking to graze at a higher altitude with ample amount of grasses and herbs to choose from.

For the entire two hour hike up the mountain we could hear their bells ringing just a turn of the trail behind us. Luckily for us they moved slow on the steep slopes and we were never trampled by a herd of milk-cows.

We headed to the baita (chalet or log cabin, usually on top of a mountain) of Marco’s uncle for lunch. Marco sliced fresh bread and branzi cheese and we added different sliced meats for our sandwiches. It was a full ten degrees cooler in the mountains than in Monza and though the weather channel said we might catch a little rain, the sky stayed clear for the entire day. After lunch we laid out to enjoy the sun and the breeze and rest before the hike back down. We thought the cows had been stopped at another pass along the way but after lunch we heard the tin music of their bells in the distance. It grew stronger and stronger until we saw the herd crest the hill with all of the workers running to keep them in line. They led them to a water trough and sectioned them off to rest and rehydrate.

This is where they’ll likely pass the summer. I was told that they used to drive hundreds of cows from multiple different herds up into the mountains to spend the summer every year. This way the owners don’t have to pay for food, as the cows have a nearly unlimited food supply, and they say in the mountains the cows produce a better, higher-quality milk. Now it is a much less practiced tradition (likely because of the cost of transport and the high pay of the shepherds who pass the summer with the cows) but it seems not every dairy farm has traded in fresh air and sunshine for tiny stalls and machines.

We chose a direct path through the woods for a quicker hike back down. It finished, I kid you not, in a field of yellow and purple wildflowers. The thing that makes escapes special is knowing that you’ve escaped. Here, there was no denying it. Driving back home on Sunday the shift in the air from cool and refreshing to scorching, near-fantasy back to reality, was almost tactile. Like always Monday came again, but this time we had a rejuvenating weekend to prepare us!

2 Responses to Escape to the Mountains